Today Kamarinskaya is mostly known thanks to the Russian composer Mikhail Glinka's ouverture. In fact, Kamarinskaya is a traditional Russian folk dance based on the melody repeated over and over. While dancing, the main melody is replayed so many times until the dancers run out of any energy. Repetitve motive is very important in Russian folk music. When you think, it is all over, it just starts up once again on the higher level. Given the energetic nature of the Russian dance, you can easily imagine that everyone is warmed up even the spectators.

There are some theories about the origin of kamarinskaya melody. It is believed that this song type is derived from old "skomorokh" songs. Though originally kamarinskaya was a dance song, later it became solely a dance. Kamarinskaya music belongs to Russian folk tunes naigrïshi, that mainly consist of three-bar phrases and played in an endless number of variations in an endless mode. 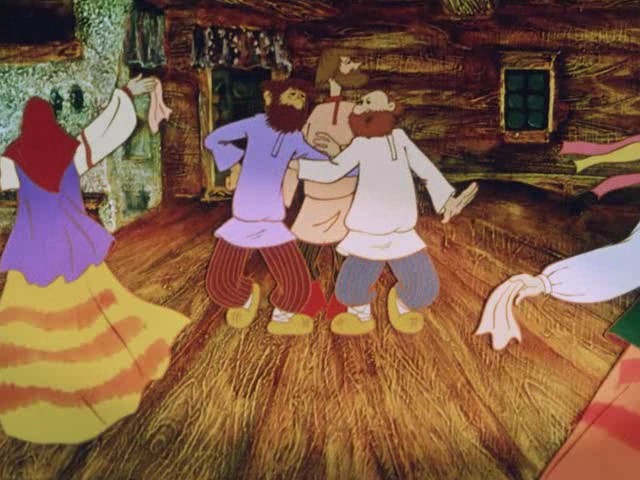 The main dance steps of Kamarinskaya are hops, walks, heel-brush steps, knee-bend and prisyadka. But, honestly, when the kamarinskaya is sung and danced, the right steps are no concern. Grotesque steps, shoulders shrugs, sometimes ugly body movements - everything is allowed until the dancers strike a spark out of spectators. Russian costumes for kamarinskya are bright and of many colors.

So, no matter how Russian dances are performed, at stake are only vituoso improvisation and emotional charge.