Folk dancing is among the most outstanding popular art forms, an aesthetic representation of various events from everyday life, a product of creative imagination coupled with a strong sense of ethnic identity. Throughout their centuries-old history, the Russian people have created folk epics of great artistic merit, folk tales that are full of popular wisdom, delicate lace with most elaborate designs, wonderful pottery and woodcarvings, as well as a wide range of embroideries and numerous songs with clever, touching lyrics and memorable rhythms. They have also invented many beautiful dances, highly varied in their patterns and functions, with the khorovod (round dance) considered a veritable pearl among them.

The khorovod is not only the most popular, but also the most ancient of Russian folk dances. Most commonly, it is a round dance – people stand in a circle (resembling the solar disk) and move from east to west, as does the Sun in its movement across the sky. These steps are traced back to ancient pagan rites and Slavic festivals, during which people worshiped the powerful God of the Sun, Yarilo.

The khorovod has a symbolic significance for the country – it is difficult to single out any other element of Russian culture that could have invariably played a bigger role throughout so many centuries. Performed during three seasons – spring, summer and autumn – this round dance reflects such distinctive traits of the Russian national character as joyfulness, creativity and enthusiasm. Without doubt, the khorovod may be considered a symbol of beauty – the beauty of movement, of the surrounding world, and of course of human beings.

Girls were considered the backbone of every khorovod. In some regions, country girls started going out to dance in a khorovod at the age of 12 or 13, in others– at the age of 14 or 15. However, it was not always a question of age. This pastime was considered a good opportunity for young girls to meet young men and attract a future husband. Therefore, parents of two or more girls often prohibited their younger daughters from going out to dance in a khorovod, believing that the eldest should be given priority in choosing a husband and getting married. Younger daughters were deliberately shielded from the attention of young men until the eldest daughter had married.

The khorovod was a popular dance both in both rural and urban areas. Without going into too much detail we can say that the city variation of the dance was very similar to that performed in the country. Both variations were performed with joy and expresiiveness, and followed an intriguing storylines. Wherever khorovods were danced, they were supervised by a khorovod mistress, a sort of cheerleader – the most cheerful and peppy woman in the neighbourhood, usually middle-aged but youthful in appearance. Bold in manner, talkative, lively and agile, she would be a good singer and dancer. Her role was to observe how people danced and suggest new dance movements and patterns.

Russian folk considered the khorovod an important event. Women and girls put on their best dresses, which were prepared very carefully. Girls would weave, sew or knit “spruce” dresses themselves, buying ribbons and shawls at trade fairs. Men were usually regarded as guests at khorovod parties, invited to share the joy of the occasion. Upon invitation from the khorovod mistress, young bachelors would participate in various games with unmarried girls –they looked keeping an eye out for a potential match among the pretty, well-dressed girls. Girls kept theirown eye on the ball, observing which of the young men paid most attention to them, or trying figure out who might invite them to be their partner in the following game.

Russian khorovod dances took place at different times depending on season, days off work and social class. In rural areas, people danced in khorovods starting from Easter Week and continued until the commencement of sowing period. In other places, khorovod dances started from August 15 and ended with the arrival of winter. Villagers could have such fun only on holidays, as they were too busy working in the field and doing other chores at other time. City dwellers started dancing in khorovods from Easter Week and continued throughout all summer and autumn, usually several times a week.

As for the type of khorovod dances, there are two – ornamental and dramatic. If a dance doesn’t have any definite storyline or prominent characters, dancers usually move in rounds, positioning themselves so as to create a specific ornamental pattern. This type of khorovod is called ornamental. Most often these ornaments are symbols of different natural phenomena found in Russia. The close link between people’s everyday lives and folk art has prompted the emergence of various khorovod patterns, often modeled on creations of lace-makers, wood-carvers and artists. Russian folk attached great importance to the originality of dance patterns. Often, cheerleaders deliberately invented sophisticated patterns to make dances more expressive.

Dramatic khorovod dances were usually accompanied with a song. Such dances had a clear storyline and different characters, created by means of facial expressions, gestures and dance movements. Often, characters of such dances were animals and birds, and dancers tried to emulate their habits and movements. Themes for dramatic khorovod dances were usually drawn from folk songs and covered a wide range of experience from the everyday life of common folk. Some of the most common themes were: the pain of hard labour, the search for a potential match, relations between husband and wife, love, fabulous events, or ridiculing landlords. To produce the desired effect, dancers not only had to have good acting skills, but also needed to resort to the use of many accessories, such as sticks, garlands, handkerchiefs, shawls, stools, etc. Each of the objects they used was symbolic. Thus, a garland was the symbol of conjugal union, a handkerchief was the symbol of a pillow, a silk lash symbolised submission to someone who was stronger. Every little detail of khorovod dances were of high artistic value. 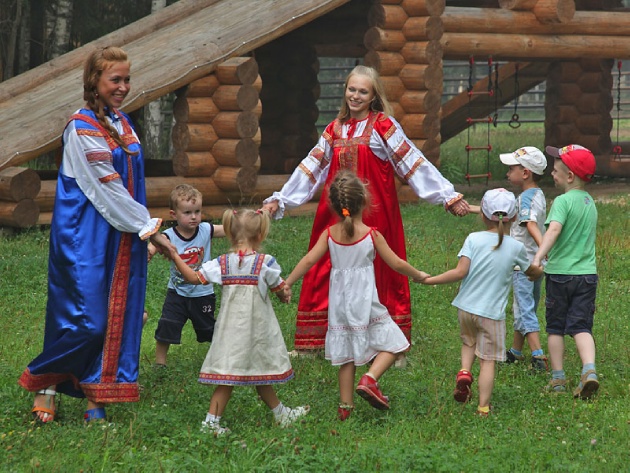 Reading about all the intricacies of the Russian khorovod dance, one can’t help but admire its expressiveness, beauty and distinctive nature, as well as the power of its creators’ imagination.