The Russian Cossack dance, also known as Kazachok or Kozachok dance, in Ukrainian Hopak dance, or squat dance.  History tells, that Cossack or Hopak was firstly danced in southern Russia and Ukrainian military communities in the 1600s. The roots of so poluar today Russian dance  are mainly from very ancient Croatia, then mixed with some Tatar elements. In fact, old Cossack dance has nothing in common with the actual Russian dances. It was marked by a gentle walk of the woman and by active bowing from the man side.

Today Hopak dance is full of whirling or leaping. The steps exhibited include many acrobatic jumps. The Cossack dance is now choreographed, but appears to be full of improvisation. Main part of the Russian dance includes unison movements. Solo dancers, usually male, perform amazing feats and are always the highlights of the program. Cossack dance costumes look like Ukrainian folk shirts and dresses. You can see the examples below: 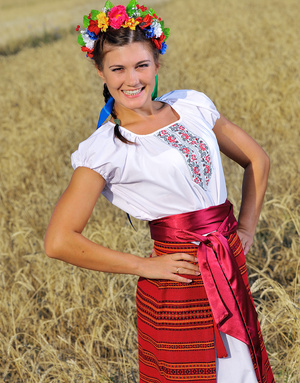 Some interesting facts about this Russian dance:

Russian and Ukrainian dance costumes for women and men can be found in the categories.