Russia is rich not only of the culture but of the folk dances as well. There is a great variety of dancing styles. The dances vary by the music, the movements, the songs, the number of the dancers. But all these diverse folk dances have something in common – the Russian style. Every dance goes in the tight combination with the Russian traditional dress. 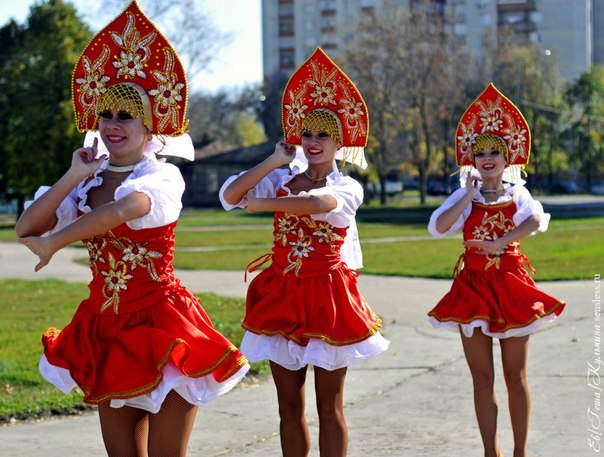 Russian folk costumes differ from one region to another. But all of them are colorful and have a lot of details: sarafans are decorated with bright ornaments, blouses, and headpieces with skillful embroidery. The Sarafan dress was popular in many parts of Russia. Kokoshnik headpieces were worn by married women. Girls simply braided the hair into the plait and decorated the head with ribbons.

Men's costumes look simpler, the main accent is on the embroidered shirt usually of white or red colors. Some lads have woven ornamental belts. Everyone knows Russian Kosovorotka that has a collar fastening on the left side.

Khorovod is one the ancient Russian round dance. The dancing was a way of getting rest after hard work and get socialized. Every person of any age took part in the round dances. This dance can be pure female or the mix of women and men. Khorovod is often accompanied by a song, the movements are soft and fluid.

Russian folk dances can be divided into 3 types: the khorovod dances, the competition dances, and the dances with special figures like quadrille or barinya. There was not any strict type of the dances, they differ from one village to another.

The so-called competition dances carry the individual improvisation character. These folk dances were of great popularity, as the men and the women could show off their talent and express themselves. In such Russian dances, there are no rules or any specific sequence. Every dancer surprised the public with unexpected high squatting or non-stop whirling. In fact, the Russian dance is often presented abroad by this dance squatting. As a rule, one dancer shows the movements, the second one should perfectly repeat them and then show something from himself.

If you have by chance to see the Russian folk dances on the stage, don't miss it! You will have a great pleasure for sure!