Close living with the nature in old days brought it up as the main topic of the hand embroidery, decoration and paintings. People invented different natural symbols that incorporate the strength and magic to protect them from the unknown, the evil, the poor harvest or, on the other side to help become wealthy and healthy.

The Russian folk art was formed in the late 1800s, when people started decorating their houses, painted flowers on the dishes, making the first porcelain. The decoration in the Russian style was present everywhere in the cities and villages. The earth blossoming was represented by the multitude of the painting colors, the colorful patterns were used to embroider the Russian folk costume.

In the beginning of the 19th the century floral headscarves with the amazing ornamentation appeared in the market. Colorful motifs on the Pavlovo Posad shawls, ornate flowers on the Zhostovo trays, magnificent colors on the Kursk mugs. Folk art was an integral part of people's lives.

Every region developed its own crafts traditions and used different styles and colors. Many ornaments served as talisman, as people believed in the magic of the nature. They decorated doors, windows, dishes and clothes to protect their families and houses. Most folk art works from different regions are dominated by bright colots. Every artist developped its own style, simple at the first glance, it featured in the most delicate way petals of the flowers and curvy stems.

Floral motifs were the main feature in Pavlovo Posad and Zhostovo designs. Fedockino, Palekh and Holuy were specializing on the scenes with people. Khokloma style is described by bright golden leaves with flowers and red berries on the dark background. Some of old Russian folk art crafts have been kept until today, you can easily buy Pavlovo Posad shawls, Zhostovo trays or Khokhloma dishes. 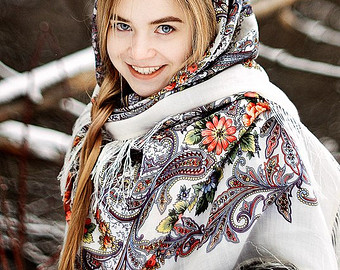