Kalinka is considered an icon of Russian folk dancing. The name of dance comes from a simple but incredibly popular song written in 1860 by the composer and folklorist Ivan Laringov. Kalinka translation is a snowball berry. Speedy tempo of the song increases with every new refrain. Thanks to Laringov the Kalinka song is acknowledged as most popular Russian folk song all over the world. The song popularity brought the dance on the biggest stages. The steps of the Kalinka dance are various but most frequent one is knee-bending (called preesyadka in Russian). 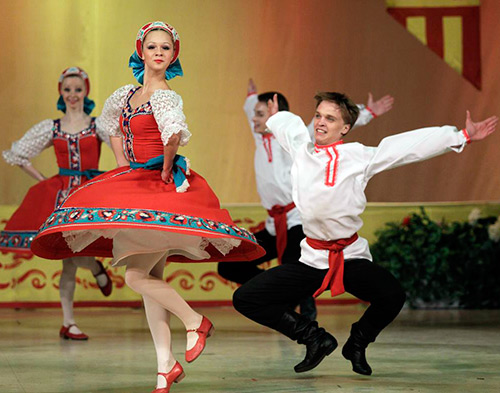 Kalinka music so simple and repetitive had a great imfluence on different cultures. You can hear it at ice hockey arenas in the USA. Since Abramovich bought Cheksea, Kalinka song is often played before and after matches. The Russian dance Kalinka gained popularity in the USA in 2008 thanks to reality show 'So you think you can dance'.

Here you can find the perfect Russian dress for Kalinka dance.