Kadril' is  well known under different names such as Quadrille, Kadrille or Rigodon. The dance doesn't have Russion origin, it was fashionable in late 18th- and 19th-century and was usually performed by 4 couples in a quadratic shape. As a new dance type in Russia, the quadrille was first introduced in ballrooms in the nineteenth century. At that time Russia was closely connected with France. Later kadril' became popular among all parts of the population, in cities and in villages. Quadrille also used to be known as the dance of Moscow suburbs.

Russian Kadrille is a humorous competitive couples dance. Russians often perform folk dances in an improvisational way. The figures in a rectangular shape were not fixed anymorem since the dance spread among all the population. Even today you can easily find a circle kadrille or a line kadril'. 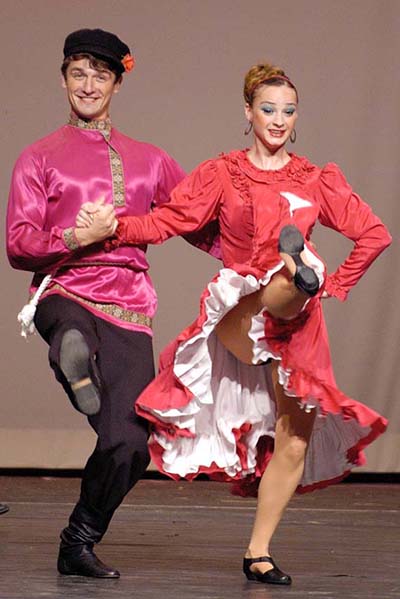 The dance costumes for kadril are various. Men usually have bright kosovorotka shirts and bright Russian folk dresses like Annushka.